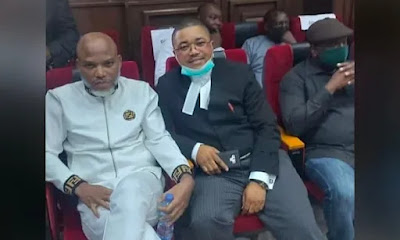 On Wednesday dressed in a designer wear he wore when he was re-arrested and brought back to Nigeria in June 2021.

Seated in the courtroom with legs crossed, Kanu beamed with a smile as he took some time to pose for photos with his lawyers.

The secessionist leader is a holder of Nigerian and British passports. He had earlier jumped bail in June 2018 before leaving for the United Kingdom though he said that he fled because his life was no longer safe in Nigeria.

After about three years abroad, the Attorney General of the Federation and Minister of Justice, Abubakar Malami (SAN), at a press briefing in Abuja on June 29, 2021, announced that the IPOB leader was re-arrested in a foreign country and extradited to Nigeria.

Kanu’s Lead Counsel, Ejiofor Ifeanyi, had said the IPOB leader was re-arrested in Kenya and whisked to Nigeria

However, there was confusion on Wednesday as Kanu’s team of lawyers staged a walkout over the refusal of operatives of the Department of State Services to allow some of them to gain access into the courtroom. 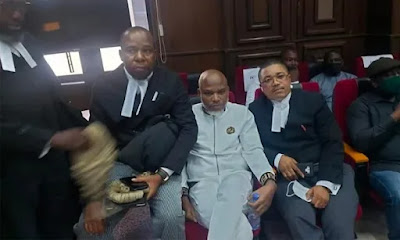 Though the counsel for the Federal Government and Director of Public Prosecution, M. D. Abubakar, urged the court to proceed with the trial in the absence of Kanu’s lawyers, the judge declined and adjourned the case till January 19 and 20, 2022, for trial.

Kanu’s followers in Nigeria had declared several sit-at-home orders in the South-East to protest his arrest and demand his release from the custody of the secret police.

The sit-at-home orders have been said to cripple economic activities in Imo, Abia, Anambra, Enugu and Ebonyi, especially on Mondays.

The proscribed group had also declared a sit-at-home which threatened the Anambra election but later called off the order. 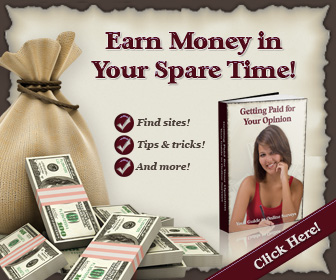 Email ThisBlogThis!Share to TwitterShare to FacebookShare to Pinterest
Labels: are angry with Nigerians’ leader especially on President Buhari’s administration., How to start affiliate marketing, IPOB- Ex-President 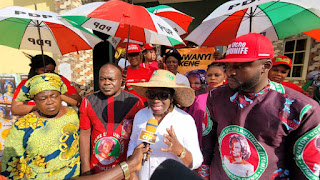 The Senator representing Anambra Central Senatorial District, Senator Uche Ekwunife, has restated that the Peoples Democratic Party (PDP) is a party founded on the principles of democracy, adding that the PDP thrives on issue-based politihcs. She expressed optimism that the people of Anambra will through their votes choose the PDP amongst other parties ahead of the November 6 governorship election.

Ekwunife, who spoke in Abuja on Tuesday, September 28, 2021, while addressing newsmen shortly after the meeting of the transport sub-committee for the upcoming national convention of the party, noted that the party would provide the needed leadership Ndi Anambra are yearning for, stressing that bad governance would be a forgotten history by the time the PDP reclaimed Agu Awka.

"In terms of provision of quality leadership and passion for good governance, PDP is the best alternative. This is very much evident in the performance of governors in PDP controlled states. In Anambra today, the party has a candidate who is sellable. Our candidate is working hard to ensure that the party emerges victorious and we are strongly supporting him", the federal lawmaker said.

Speaking further, Ekwunife who is also the chairperson, PDP state governorship campaign council stated that the mammoth crowd at the party's campaign rallies shows wide acceptance of the party by the people of the state. She stressed that Anambrarians have strong confidence in PDP and will vote in the party as a credible replacement for the ruling party in the state.

"When you move around Anambra, it is glaring that the people need a better infrastructure than they have today. They are yearning for a radical improvement in almost every sector of the state economy and are ready to effect the necessary political change that will guarantee a prosperous future for them and their children by casting their votes for PDP."

Senator Ekwunife further urged Anambrarians to turn out en masse, cast and protect their votes on the election day, assuring that their votes must count and no party would be allowed to rig the election. She assured that the exercise would be free, fair and credible, adding that security operatives would be on ground to ensure a hitch-free election.

Ekwunife reiterated the need for the government to address the current security challenges in the south-east, emphasising that the protection of lives and property remains the primary responsibilities of every responsible government.

"The killings being reported across the state is quite disturbing. Our people must understand that we cannot achieve our collective aspirations by spilling innocent blood."

"This upcoming election is not about the politicians but about the people. Efforts must be made by all stakeholders in the electoral process to ensure the conduct of a free, fair and credible election. I am certain that with PDP at the helm of affairs in the state, Ndi Anambra would be assured of productive, versatile and all-inclusive governance", the ranking Senator assured.

Email ThisBlogThis!Share to TwitterShare to FacebookShare to Pinterest
Labels: are angry with Nigerians’ leader especially on President Buhari’s administration., How to start affiliate marketing, IPOB- Ex-President

"Cheating" social media groups be dey in full swing prior to de conduct of de Mathematics (Elective) and English Language Papers on 9th and 13th September, 2021 respectively." WAEC confam am for statement.

But de next line of action be to punish alias sanction all de pipo wey dem find culpable [those wey dey involved].

Email ThisBlogThis!Share to TwitterShare to FacebookShare to Pinterest
Labels: How to start affiliate marketing