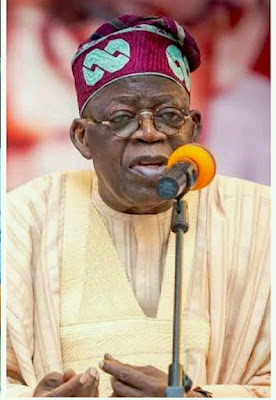 Mr Tinubu has reduced the office of the Presidency considerably.

His ill advised run for that office has made the office of the Presidency which is the most powerful office in the whole of black Africa incapable of repairing the damage this run would have done to his reputation and standing in the eyes of the world.

As Nigerian President, If he wins and which i am very sure he would likely win, he would be standing infront of the world diminished in stature and lacking in grace.

No Nigerian in the last 2o years have garnered the kind of influence and power that Mr Tinubu has garnered.

He has remained the core of the Nigerian political landscape. Playing a larger than life role in making and breaking political careers.

As Governor of Lagos State, he stared down the eyes of a rampaging Obasanjo Presidency who was intent on bullying its way through on all fronts.

Mr Tinubu came out of that battle a hero of some sorts garnering newer followers and building for himself a reputaion of mythical proportions.

He added to his allure by forging an alliance that uprooted a sitting President and his position in our history  assured.

He was on the way to being positioned as the fourth founding father after the immortal - Awo, Zik and Ahmadu Bello.

We would have been talking about the Tinubu era the way the british talk about the Elizabethan era.

But somehow, someone whispered to him to go for the Presidency.  Inordinate ambition set in and the road to a whittling down commenced.

As he shouts- God bless PD..... I shed a tear. Who willl have the nerve to stop this. This is like wathcing a great champion being beaten mercillesly to a pulp by a young upstart.

Remember how we watched a stricken Mohammed Ali stricken and ravaged by Parkisins disease and with shaky hands light the Olympic flame.

Remmber how we contracted it to the lithe gazelle who floated like a bird and stung like a bee.

Remember how we cried. That is what we are watching daily in Nigeria today.

Our great champion is no longer floating, he is huttling down like an old diesel engine needing a quick overhaul.

The Ciach has to jump in to save the great old champion from further humiliation.

Orthewise, we will watch the champions,  blood splatered face in tears.

I love Tinubu. I have always loved his startegic push. His moves from the NADECO days thru the Senate on his way to building the most glamorous and enviable political carreer since Nnamdi Azikiwe.

I had even met with him with a request to write a book on him. But what i see today is harrowingly sad for me.

From the young upstart Hundeyin, to the many shady dealings with his educational status, birth and other such types to his frail appearances on the soap box down to the ever so numerous gaffes, I cringe.

When will the coach jump in and throw in the towel. Is it until we see his stark nakedness that we will come to the realisation that we are watching a great desecration of a political institution?

Why are we so wicked. Egging him on when we know that he lacks the physical stamina and  the right integrity to push for a presidency at these times of information over flow.

The moment Tinubu refused to back a candidate and threw in his hat, I knew this would happen.

I wondered how he would run through the fire that is a presidential run without being burnt.

He is being burnt but the sycophants would not let him see it as they continue to sing his praises while extolling his virtues to high heavens.

I see Baba shake, i see him stuggle to hold the microphones, I see him slur his speech and i see him strugle to open his eyes and I wonder what is going on

Mr Tinubu needs to be handled with grace. He has given so much to Nigeria, he should not be hung out to be pelted with rotten tomatoes all for a pitiable run for the Presidency.

Can the coach, whoever he is throw in the towel now..lets salvage whatver is left of his dignity for he remains my hero and a hero to millions more and we are not happy with what we are seeing today.

He should be feted, celebrated and staues built for him. He should not be moved from region to region to be  made a caricature of and to be laughed and mocked all because of a Presidency that he may not even have the physical strength to carry to fruition.

Enough  please. Give me back my hero. Please i beg you all.