Nyesom Wike currently serves as the executive governor of Rivers State in the South-South geopolitical zone of the Federal Republic of Nigeria. The Punch Newspaper reports that president Muhammadu Buhari honoured governor Wike with the distinguished award in infrastructure delivery. Let us carefully identify some flyovers that have been completed by Nyesom Wike this year. 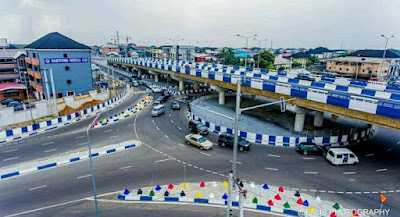 According to a report by the Cable, this fantastic flyover is located in the capital city of Rivers State. The Cable reports that this project was officially inaugurated by Adams Oshiomhole this week. Below is a picture of this flyover.

It is important to point out that the construction of this flyover bridge started in the first quarter of last year. The Punch Newspaper reports that this flyover has been completed by the government of Nyesom Wike. Below is a picture of this incredible flyover which is located in the city of Port Harcourt.