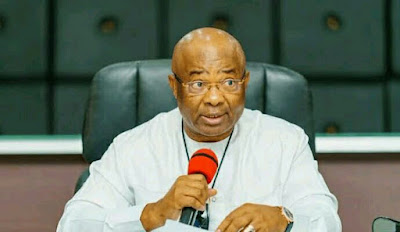 The Imo State Governor, Hope Uzodinma, has said that the 2023 presidential election is going to be centered on electing a leader that will serve the interests of all Nigerians, and not about electing an Igbo President. He stated this during a recent interview on Channels Television's Politics Today.

Uzodinma made the statement while answering questions on what he thinks about the 2023 election, and if he thinks that the presidential candidate of his party, Bola Tinubu, will win the forthcoming election.

The Imo State Governor said that he has done well as a governor, and that his achievements will win supporters for his party in Imo state during the elections.

He said - "The presidential election is an election for Nigerian President, not for Igbo President."

In recent times, discussions on Igbo Presidency have been gaining momentum on social media, and some stakeholders and interest groups believe that Igbos should be given a chance to produce the next President in the interest of fairness and equity. Even though none of the two major political parties in the country - APC and PDP - fielded an Igbo candidate for the 2023 election, the emergence of Peter Obi as the flag bearer of the Labour Party seemed like a burst of hope for those who have been pushing for Igbo presidency.

But Governor Hope Uzodinma has reiterated that the election is not going to be about Igbo presidency, and that his responsibility is to convince the people of his state to vote for his party.

What do you have to say about this statement from Hope Uzodinma? Feel free to share your thoughts with us.