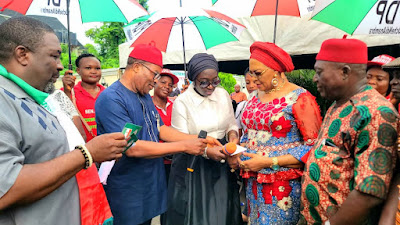 The defection is a confirmation that the majority of the stakeholders particularly from Anambra Central Senatorial District have adopted Senator Ekwunife as their consensus candidate for the senate seat.

Speaking on Thursday, June 23, 2022, at Anaocha LGA, during the grand reception to welcome the decampees, the federal lawmaker hailed the former Commissioner of Education, Dr. Uju Okeke, Hon. Lawrence Okafor, Hon. Okey Agunwa and thousands of their supporters for the decision to join PDP, noting that the party belongs to the people. She noted that a vote for PDP is a vote to consolidate on her responsive representation.

Whilst highlighting her plethora of ongoing projects which include Cosmic Ray Laboratory in Unizik, Biotechnology Lab situated in Abagana, road infrastructure across the communities, Ekwunife stated that she has no comparison amongst other candidates of various political parties jostling to represent the zone.

The grassroots friendly lawmaker further eulogized the former BoT member of APGA and stated that her political and administrative experience would be advantageous to the party in the state.

"On behalf of the PDP family I want to use this gracious moment to welcome our dear sister into the big family", Ekwunife noted.

On her reason for joining the PDP, Dr. Okafor narrated that it was borne out of her special love and admiration for Ekwunife. She urged all women and stakeholders irrespective of party to queue behind the quintessential lawmaker in her bid for continued excellent representation. "After consulting with my family and supporters I have decided to join an exceptional woman who is regarded as the most accessible, hardworking and Infrastructural driven lawmaker in her quest to put the zone on the map of development,"

The former APGA Chieftain assured that she would work tirelessly with her supporters to return Ekwunife to the National Assembly.

Also speaking, Hon. Sir Lawrence Okafor who collapsed his structure for PDP assured of his full support in the upcoming general elections. He noted that Ekwunife's quality representation was a huge factor in his decision to join the PDP.

Earlier, the Chairman of Senator Uche Ekwunife Campaign Organization thanked the PDP stakeholders for gracing the occasion. He said that amongst the rare qualities God blessed Ekwunife with, is that of touching lives positively.

Other stakeholders who spoke eulogized Ekwunife as the best lawmaker in Nigeria. They acknowledged that she stands out in delivering the dividends of democracy to the doorsteps of constituents.

Meanwhile, the highlight of the occasion was the presentation of the PDP membership card to Hon. Dr. Okeke, Hon. Sir Okafor, Hon. Agunwa and others by the party's Nri ward I chairman, Mr. Onyeka Nwaoguji.

Posted by Humphrey on June 26, 2022
Email ThisBlogThis!Share to TwitterShare to FacebookShare to Pinterest