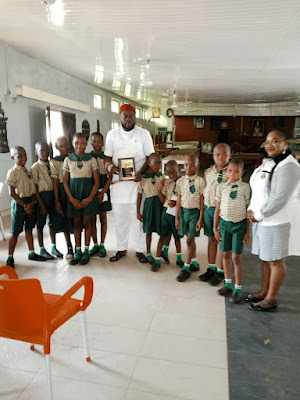 The kids who where led to palace by the proprietress of the school Mrs Akudo Lorrita explained that they came visiting so that the children can behold the beauty of the palace, understand more on igbo  tradition and history.

In an interaction with the kids,

His Majesty The Regent goes on to lecture the visiting school pupils on the democratic nature of the Igbo nation over the centuries before the coming of the European colonists, the independent mindedness of the Igbo Man, the religious beliefs of ndi Igbo and the mythology of Igbo enweze misconception..

Celebration of the International Children's day..

While responding to media correspondence,

He emphasised that Children are the greatest gifts in the society, also stressed on the importance of grooming a child to become good citizens and ambassadors of the igbo nation and Nigeria at large.

He used to opportunity to frown at the increased child labour, child trafficking, ritual killings, child abuse,  and deprivation of child education rights, stating that these vices are contributory indices of current youth restievness and insecurity.

His Majesty explained that when a child is deprived of quality education, and parental care, often ends up in the streets to become a nuisance.

He however urged the visiting kids to be good ambassadors of their parents, school, church and Society.

The highpoints of the occasion Is the presentation of PHILANTHROPIST AWARD in recognition of his contributions to education of African child through his EZE-NRI ENWELANA II FOUNDATION.