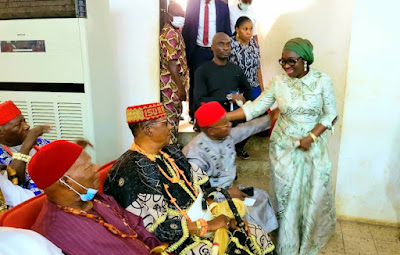 In a bid to find a permanent solution to the lingering security challenges facing the state, the Senator representing Anambra Central Senatorial District, Iyom Uche Ekwunife, has called on stakeholders to rally round the governor of Anambra state, Prof. Chukwuma Soludo in his efforts towards tackling insecurity in the state.

Senator Ekwunife, who made the call during a one-day peace building and security dialogue session on Saturday in Awka, congratulated the governor for the initiative, emphasizing that security was everyone’s responsibility.

She charged the residents of the state to be vigilant, adopt the “see something say something” approach and report any suspicious activity in their neighbourhoods to the appropriate quarters.

Speaking further, the federal lawmaker urged the government to invest in intelligence gathering through the use of technology, upgrade the equipment of the security operatives and improve their welfare.

According to the Senator, a seamless and secured information platform for the people to feel protected to share timely security information should be enabled by the state

While highlighting poor parenting as one of the major sources of insecurity, Senator Ekwunife, called on parents to rise to the occasion in ensuring that their children and wards were trained under the best moral upbringing.

She advised the State House of Assembly to enact a law for the State Orientation Agency to educate the public on the right behavioural attitude to help curb the menace of insecurity.

In his speech, Governor Soludo commended the stakeholders and everyone for their presence, noting that sustained collaboration, the state would be peaceful and prosperous

Posted by Humphrey on April 03, 2022
Email ThisBlogThis!Share to TwitterShare to FacebookShare to Pinterest