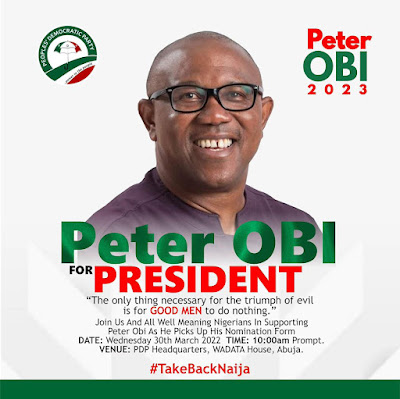 I love Igbos but I have to tell them the truth because I love them.

It is now a law to transmit votes electronically, that means rigging of elections has been reduced drastically.

Igbos are only tribe that have 99% of voters in the South East and second highest voters in other regions in Nigeria.

In the South West, after Yoruba votes, Igbo votes come second. Lagos has the highest number of voters in Nigeria and Igbos are competing with Yorubas in voting power in Lagos.

In the North West, go to Kano and Kaduna and you will know that Igbos are the second largest population after indigenous people.

In the North East, go to Maidugri and all the state capitals, Igbos are the second largest tribe after the indigenous people.

If Igbos truly want to determine who will rule this country today, they will but they only sit back and lament without any action.

Peter Obi is the most qualified candidate to rule this country but Igbos are not with their voters card.

Go and get your PVC today!!!

Posted by Humphrey on March 30, 2022
Email ThisBlogThis!Share to TwitterShare to FacebookShare to Pinterest