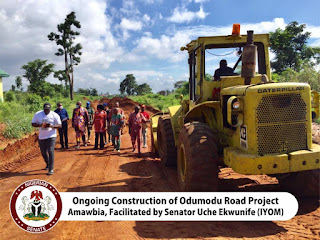 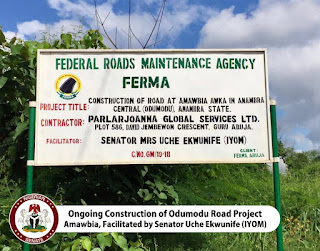 The Senator on Tuesday, 22nd September 2020 sent a delegation led by the former Commissioner for Women Affairs, Lady Henrietta Agbata to brief the community on the ongoing road project.

The delegation was received by a team led by the President General of Amawbia, Comr. Ebele Nwufo (Okwuejiofor Amawbia) and a former Director General of the Standard Organization of Nigeria (SON), Dr. Ikem Odumodu.

Speaking on behalf of Senator Ekwunife, Lady Agbata appreciated the people of Amawbia for their support for the Senator in the last election. She noted that the Senator and her party, the Peoples Democratic Party is committed to ensuring that they reward the trust and confidence the people of Amawbia and many other communities in Anambra Central Senatorial District reposed on her and the party by attracting dividends of democracy to the Senatorial District.

Agbata extended the Senator's commendations to the former DG of SON, Dr Ikem Odumodu for his tremendous support during the last election which led to the victories the party recorded in the election.

In his reaction, the President General of Amawbia, Comr. Ebele Nwufo expressed delight on the commencement of the road project. He lauded the Senator for facilitating the project and stated the willingness of the community to cooperate with the contractor to ensure that the project is completed within time and specification.

On his part, the former Director General of SON, Dr Ikem Odumodu whom the road was named after stated that he is not surprised that the Senator is living up to expectations and fulfilling the promises she made during the campaigns, having known her as a politician who is true to her words.

Dr. Odumodu described the road project as an important one for the community "owing to the fact that it will be the first standard road that leads to the industrial estate in the community". He assured the Senator of the continued support of the people of Amawbia community and wished her well in all her endeavours.

Recall that Senator Ekwunife recently commenced electrification of some Anambra Central communities with solar powered street lights. She equally recently completed and handed over a multipurpose school hall at St. Joseph's Primary School Umuawulu and is set to complete a number of projects that are ongoing in various communities in the Senatorial District. 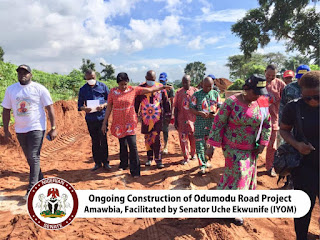 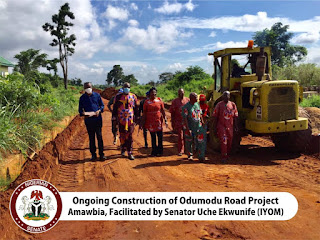 Create Your Own Free in 3 Easy Steps without coding. Get Started

Posted by Humphrey on September 22, 2020
Email ThisBlogThis!Share to TwitterShare to FacebookShare to Pinterest